The sun is shining (yes, really) and Sean is busy, fussing over his post office, writing all sorts of important stuff. A customer (Miss Felicity) approaches

“Please may I buy a money order?”

Startled, but fully aware that she is talking to a master of the universe in the making, Miss Felicity tells Sean that she has to go to the school’s ATM to draw some cash. She returns and, under Sean’s watchful eye, counts out five £10 notes to make £50. Sean hands over the money order and says:

“How many stamps?” Sean is nothing if not patient.

Miss Felicity tells Sean how many stamps she needs and he carefully counts them out for her.

“One hundred and eighty five pounds!”

“Goodness, that’s so much money. How am I going to pay you?”

There not being such a thing as a £185 note (nor any notes, seeing as Miss Felicity is currently £50 lighter on account of the money order), Miss Felicity and Sean decide to embark on a bit of quantitative easing. They use as their inspiration a poster, pinned to the garden shed, of Australian dollar banknotes (the reader need not be concerned that we appear to have moved countries. Children at Victoria Road frequent countries, and continents, at their pleasure, and Sean has been much taken by Australia during the term’s theme of The Continents).

While they are easing away, and making an excellent job of recreating the faces on the notes too, Miss Felicity, who has learnt a thing or two over the years, starts telling Sean about the two faces on the $20 note: Mary Reiber and John Flynn.

Mary Rieber was a child convict, transported, aged fourteen, to Australia before making a considerable success of herself. At the end of Miss Felicity’s peroration, Sean knows a lot about transportation; possibly, he is left with the impression that the way on to an Australian banknote is to steal a horse first…

John Flynn created the flying doctor service and Miss Felicity is no less loquacious in her description of the importance, given the vast and inhospitable terrain that is most of Australia of this essential, and life-saving, facility.

Suitably nurtured, and having finished the necessary banknote production, Miss Felicity enquires again as to the price of the stamps:

“One thousand eight hundred and fifty pounds”, says Sean!! Miss Felicity is tempted to ask Sean for his views on the Weimar Republic’s inflationary period but thinks better of it.

“Sean, to count that amount of money we are going to need some help!” Miss Felicity and Sean go back into the classroom and emerge with the Golden Bead, which, together, they use to re-create the massive numeral of one thousand eight hundred and fifty, and its quantity, laid out in exquisite glass beads! I know many readers will be in urgent need of a full explanation of the Golden Bead. Well, tough. All you need to know is that it is to Montessori maths what Mozart is to music. 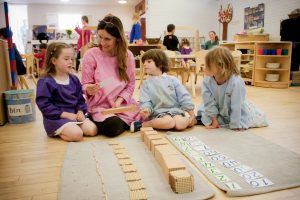 So, what has Sean done? Personal, social and emotional development by interacting with teachers and peers as the postmaster; maths by selling (successfully) money orders and diamond-studded stamps, geography by visiting Australia, history by learning the wisdom of being a horse thief and a doctor with a pilot’s licence; art by creating, drawing and colouring banknotes. What will Sean take home in his bag? Nothing, because learning like that does not get written down. But Sean knows, and we know, and now you know too.

Parents who read our handbook, and we strongly recommend that they do, will come across this:

We cannot stress this strongly enough: please do not do the alphabet with your child unless they are showing an interest and are keen to do it. Doing so with a disinterested child is likely to delay their progress and may lead to a resistance to reading in later life. If you need advice, please speak to your child’s teacher.

The paragraph above relates to letters, but exactly the same caution needs to be applied to numbers. As we learn through our degrees, parents are the primary educators. However, that does not mean that they always know what they are doing, nor that their assumptions as to what, when, or in what order their child should be learning are correct. Of the 215 different skills that we track in the development of our children, only 20 relate to numbers. And for those 20 to be acquired, many of the 215 have to be acquired first. As an example, you can’t expect a child to write if they do not yet have the strength in their fingers to hold a pencil. Nor is the introduction of more academic learning likely to bear fruit if the child is devoid of social skills, lacks curiosity and hasn’t yet experienced that learning is fun.

Leaving aside the many aspects of child development that need to be in place before it is productive to introduce numbers, it might help enquiring parents if we were to list the order in which we approach maths. As a pre-requisite, we need to:

1. Provide activities that help a child to recognize patterns, and differences in shape and size.

2. Develop the child’s ability to concentrate for a period of at least 10 minutes.

3. Ensure the child is able to follow all the steps in an activity.

Once the child has mastered these three, we progress to:

1. Oral counting (in songs, stories, the environment) to learn the order of numbers.

2. Introduction to the concept of quantity. This requires a child to work with materials (with built-in error-correction) that give them the idea that one is small, two is bigger, three is even bigger, all the way to 10).

4. After mastering one-to-one correspondence, the child is introduced to number symbols. This gives a face to quantity, allowing the child to describe their apples on the table with a single numeral: 5.

5. Now, the child is ready to combine quantity and symbol, allowing them to count quantities and match those quantities to the correct number. As before, error-correcting (and very clever) material is used to impart this learning.

6. Preparation for numeracy continues with the introduction of the concept (note: concept, not, at this stage, the doing) of addition and subtraction. This is usually achieved through songs and stories detailing more of or less of.

7. Introduction to Decimal System. This introduces the concept of units, tens, hundreds and thousands. It also helps the child to understand number placement.

8. What Mozart is to music, the Montessori Golden Bead material is to early years maths, and, at this stage, its time has come. We use it to reinforce the two concepts of quantity and symbol. The material gives the child both a sensorial and a concrete understanding of the decimal system, and reinforces their knowledge of quantity, as well as allowing them to learn numbers up to 9,999.

9. Finally, the child is ready (more than ready: fully prepared and eager) to be introduced to the four operations.

10. Then follows fractions and operations with fractions.

11. As the child progresses to primary school, they begin different activities for each one of the operations, before moving, with almost no concrete aid, to calculations with numbers beyond 1,000,000.

Children love doing their numbers. Every stage is exciting and fun. They compete with each other to find, and write, bigger and bigger numbers. They are enthusiastic, confident, competent and curious. That is our aim and their achievement.

What must be avoided is the introduction of boring maths learning, presented in the wrong order and leading so often to a child who loses all interest, and probably claims throughout their life that “I’m no good at maths.”